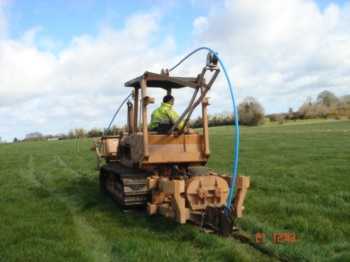 The key to upgrading the water system around a farm is installing a larger diameter pipe. Burying new pipe about 60cm (2.5 feet) in the ground is a significant job with a tracked digger and, if not done right, can leave uneven ground. Another option is to have a new pipe installed using a specialist mole plough.

Recently, I went to see pipe being buried on a dairy farm in Co. Laois. The job was being done by Terra Services, who are based in Athy, Co. Kildare. Most new installations involve laying the pipe in a loop – this will give higher flow to any trough on the loop. This job involved laying 3km of single line between two farmyards, each with its own well and pump.

A valve in the middle will isolate both systems but it means a back up supply would be available if one system went down.

A larger than normal diameter pipe was used to ensure that there would be good ongoing flow to the drinking troughs. 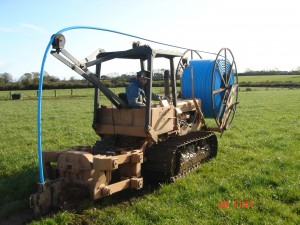 The pipe-laying unit is based around this Case 475 crawler. Reels of pipe are carried at the front and unwind as the tractor moves forward.

The pipe is feed over the top of the drivers cab and down to the cutting leg at the rear of the machine where it passes down into the soil.

The Case crawler weighs over 8 tonnes and is powered by an 85hp engine. This is a modest engine but, tom Hennessy said, the machine has plenty of power. Most of the work is done by the hydraulic motors. These turn the tracks and power the cutting unit at the rear. The pipe being laid here is 40mm blue MDPE pipe. MDPE is significantly higher grade piping than hydrodare and able to take 12 bar of pressure. “If we were putting in a loop system we would use 32mm pipe, as it is a single line we are using 40mm” 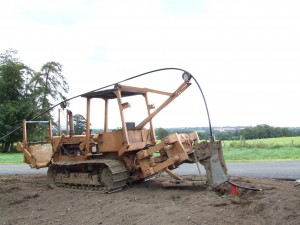 Vibrating box and blade of Case 475

This is the business end of the unit and we can see that it is sturdily built. The cutting leg is not pulled passively through the soil but, instead, it is vibrated by two counter weights located in the round housing, It is the vibration action that allows the leg to be pulled through the hardest of soil by the 85hp engine.

Tom said, It allow the leg to push big stones out of the way. “Without that, it would just sit there and spin the tracks”. The leg is operated at depth of either 24 or 30 inches.

The cut left behind be the pipe layer is quite neat and will easily flatten down by a tractor wheel, etc. 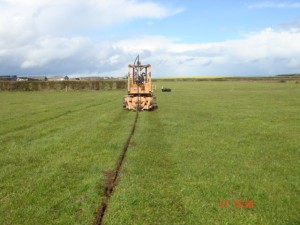 A pipe-laying job requires a clear passage across fields, so it may require that paddock fencing wire be taken down.

The farm here was not divided up in to paddocks previously and this made the laying job relatively easy. 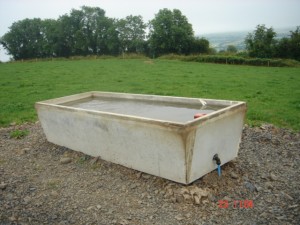 This job involved fitting some new troughs and connecting into some existing troughs. However, the old troughs were fitted with new, high flow ball cocks.

“There would be no point laying a high capacity pipe and staying with ½” ballcocks at the troughs” Tom said.

The farmer was happy to go for concrete troughs. Advantages include stability in wind, etc, and strength against pucking and scratching by cattle 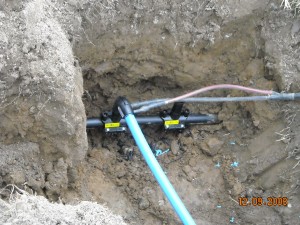 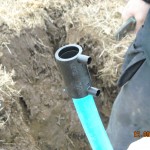 A T-Junction in the pipe at each trough. An advantage of MDPE pipe is that joints are not screwed tight but, instead, welded by a process known as electro fusion. The T-piece and other joints (Picture 7) have a copper heating coil on its inner surface. Electrical current is fed into the heater coil by the two connections at the outside of the joiner. The heat that this current generates in the joiner is sufficient to melt the plastic in the pipe and fuse it with the plastic in the T-section.

The last two hard winters saw many older concrete troughs crack in severe frost. The best protection against frost damage is to empty the trough in winter, when cattle are indoors anyway. But the design of the trough also plays a part.

Terra supplies and fit their own troughs, made to its own design. The emptying bung is large and situated flush with the trough floor. This means that the bung is easy to find and remove and that the trough will empty fully if being cleaned, etc.

Tom told me that these concrete troughs are designed to resist damage from hard frosts. The walls are reinforced with steel mesh. There are no internal walls or compartments and the four walls taper outwards. All of these features are aimed at allowing ice to float upwards as it forms, so avoiding breaking the walls.

This is a bottom filling tank and. Here, we are looking at the fast flow ballcock. It is the Apex brand, made in New Zealand. The float rises as the tank fills and eventually closes of the flow of water. To shut off the flow of water, the ballcock valve can be fixed closed by tying the twine as shown.

There is a noticeable move by farmers, particularly dairy farmers, to install larger diameter water pipe. Tom Hennessy told me “A typical cost for laying 32mm pie in a loop system across normal farmland is 2.10 per meter, Plus VAT” He said.